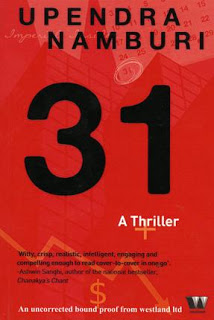 Synopsis : What can happen in a month ? Plenty , as Ravi Shastry, a middle level executive in 'Imperial Bank' is to find out . Here he is, riding high in the last quarter of a tough year for a large multinational, with every prospect of a coveted promotion. Ravi runs a tight ship and delivers results, his team looks up to him, his wife loves him and his hard-driving boss respects his choices and even hints that he is headed for bigger and better things.
But within a week, the bank's Brazil operations are shut down, the US subsidiary is in a mess and soon the global restructuring wave pounds the Indian ops - Ravi and his team. His wife is also under professional and personal pressure; a former girlfriend and now rival, a manipulative HR manager and others are turning hostile; even internal Audit is after him.

About the Author: Upendra Namburi is an engineer and MBA by qualification.  In an attempt to break the monotony of classrooms and lectures during his college years, he developed a strong inclination towards writing. Over time the love affair blossomed. He now maintains several blogs and has contributed articles to Indian and International publications.
Upendra has written on a wide array of subjects like payments, marketing, loyalty and social media. He has also been invited by several management schools across India to speak and interact with students.
The book is a little slow in the beginning but it soon catches pace. The description of the MNC culture and cut throat competition along is spot on. The pressure of seniors , and wrath of juniors , the struggle to maintain a work life balance and the desire to race ahead by hook or crook.
I personally liked the style of writing the most . The book is split into 31 days instead of chapters and you see how the protagonists life changes over a month so drastically. How your friends can turn to foes , how all you wished for can be the cause of your downfall. People working in a corporate will relate to it completely. The role of the Blackberry and Twitter in your life , the usual office grapevine and the sorts. This book is the same old wine in a new bottle. A corporate story you have read many times but with a little twist.And especially its a welcome break from the IIT & IIM crap. It gives us a few of the less explored Sales and Marketing Departments , where literally everyday is a chase.
The book revolves around the central  character , Ravi and how  he handles all his problems.He is framed in a scam , his family turns against him , someone he least expected is after him . The english is impeccable, grammar nazi is happy. But there are a few typos but that is only cause its a unedited copy (*proud grin*)
On an overall basis you can definitely pick it up . Its not exactly a sip a coffee and sit by the window kind of read, but its a I need something to read before I sleep at night kind of reads .

This review is a part of the Book Reviews Program at BlogAdda.com. Participate now to get free books!

(PS:  Sincere apology to the author and Blogadda for taking so much time to review this . Really there is no good excuse, just work and all that jazz O:))