Hello to my non-existent reader base. No, I haven't written anything new. Pfft, you think you can break me. But here is a blast from the past, from the beloved Drafts folder.
- - -

"She's a Gujarati!!?"
The world had just come crashing down on my Chellama. Ravi could feel her imagination go wild even through the phone. She was picturing 'undhiya',  'dhokla' and 'patra' being stuffed into her son and her concern was evident in her stern silence.

"Atleast meet her maa. You know she is even trying to learn malyalam?" , Ravi decided to end the silence.

"I will do nothing of that sort. You should stop seeing her. "

"Don't argue with me. Is this how we have raised you. We are not such people."

"You mean people who marry Gujaratis?"

"Stop it. We are not discussing this anymore."

"Well I've invited her home this weekend. Be nice. I've got to go Maa. See you Saturday. "

Chellama put the phone down with a dejected smile. She shouldn't have sent him away to a hostel in the first place. This is what happens when you leave children to their own doing. What if she is anything like the TV shows, the likes of Tulsi and Parvati, worse Komolika, the vamp. She shuddered at her own imagination and decided to call Ravi the very next day and tell him this could not happen and she was not going to meet that girl of his.

Chellama had picked her most expensive Kanjiwaram sari, she hadn't worn it since Ravi's sister's wedding. She was worried and decided to question her husband of things that he knew as little as her about.

"You think she is nice, will she eat meat with us?", she had asked this question three times already.

This time, Raghunathan chose to ignore it and continued reading his newspaper. Before she could ask a few more questions, the silence was pierced by the shrill doorbell.

"I've told Ravi so many times to fix that bell when he comes." Chellama cursed before turning her angry frown into an angelic smile and opening the door.

Shruti had touched Chellama and Raghunathan's feet even before she could respond to their Hello. Ravi had insisted she pretend to he be as close to Gopi Bahu, his mother's favourite TV soap protagonist to win her approval. And Shruti was going to play it to the smallest detail. She had even picked a salwar kameez that matched exactly with what Gopi Bahu wore on last Thursday's episode.

A few moments of awkward silence later Chellama was offering Shruti every item on Shiv Sagar's south indian menu which all she politely refused, although her stomach had grumbled a little at the mention of Masala Dosa. Ravi gave her quick glare to let her know that she should say yes to something. Shruti obediently said 'Yes' at Chellama's next item. Idli it was.

They ate in silence while Chellama was observing Shruti's dress, her long earrings and the way she ate her idli. It can tell you a lot about someone, she thought wisely to herself. Raghunathan decided to break the ice, he asked about Shruti's family and her work. About her little brother and what her father does. Ravi was glad everything was going smoothly.

Just when the shrill doorbell rang again, it was odd as they never had guests. Chellama opened the door to find Mr. Iyer, their doctor and very old family friend, smiling a toothy grin at her. Chellama felt panic in her throat. She couldn't possibly let him in. If word spread about a Gujarati girl being considered for Ravi's marriage, she would never hear the end of it. All the ladies would go on and on about the benefits of having  a Mallu daughter in law.

Chellama was so lost in thought that she didn't see Mr Iyer and his wife brush past her into the house. Many greetings later, they were all seated on the red and gold dewan set that Chellama had brought with her at the time as per part of wedding gifts from her innumerable relatives.

She decided to explain the situation before any speculations could ensue.
"Mr Iyer, this is Shruti, Ravi's classmate from college. She wanted to see my garden so Ravi invited her home. She is his rakhi sister." She added to clear all doubt.

Mr Iyer and his wife nodded like it was completely normal for someone to travel 200 miles to see a kitchen garden and continued to ignore Shruti like they had been all along.

"I have a proposal for you Raghu. My brother's daughter is of marriageable age now, you know her Sreepriya kutti, she's a MA Literature would be perfect for Ravi." Mr Iyer, said with the confidence of someone who had seen engineers marrying MA literatures for generations.

This was turning out to be the most embarrassing day of Ravi's life, he thought before he remembered his first day in college and decided to take control of the situation.

"I'm not looking to get married anytime soon, I am yet to complete engineering and get a job. I'm barely ready." he said in a calm voice.
"Who is asking to get married immediately, but its better to fix and keep, no?" Mr Iyer was now grinning and nudging Ravi.
"He is too young for marriage with any girl, however nice she may be." Raghunathan said in a conclusive tone.

Chellama who had not reacted at all now was consoling Mr Iyer with Idlis and saying it was just not the right time. Sreepriya would have proved to be a lovely daughter in law she added with a sad smile.
Ravi was really angry at his mother for saying that in front of Shruti who was now feeling immensely out of place.

"Come I'll show you the garden." Ravi said to take her out of the room.
"No, I'd like aunty to show me."
Chellama was surprised but didn't show it and the Iyers took this as their cue to leave with dejected faces.

Shruti was now following Chellama through a long corridor in the backyard. "You know this not possible right. I want you to understand the kind of people we live around." Chellama said a little guiltily.

"Does it really matter what people say? You have raised Ravi and made him the man I love. All I need is your approval" Shruti said placing her hand gently on Chellama's arm.  Chellama was beginning to soften but refused to show any weakness.

"All that is fine kutti, but people talk. We have worked really hard to build this reputation."
"Well I just came to see the garden anyway. These chikoos look delicious" Chellama went on to explain how she planted the first tree in her garden and how it has grown now. She took great pride in telling everyone how she grew all her fruits and vegetables in the backyard.

One hour later, Chellama and Shruti had walked back into the living room with a smile on their face. Ravi waited anxiously for someone to speak while Raghunathan, continued to read the newspaper unperturbed.

"Go kanna, drop Shruti home, it's getting late.", she scolded Ravi.
Ravi followed the instructions silently, wondering how the two women were already keeping secrets from him. 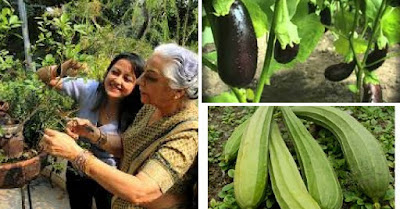