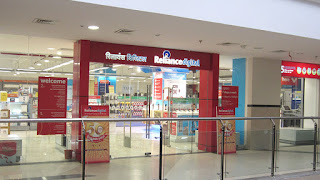 It was a very rainy Sunday morning and I was on a mission. A mission to get my goodie bag. Indiblogger has really spoilt all us bloggers with freebies, several meets and tonnes of free food. Not that I am complaining.


We had to choose from a few Reliance Digital Outlets, which by the way are hard to miss. Suddenly its like an explosion of electronic stores there is one in every 250 meters. I had selected the outlet in Infinity II, Malad. My affiliation with electronic stores is old. I am the person who goes and plays free video games on the large plasma TV until they physically snatch the joystick from my hand to give someone else a chance. Dirty looks don't work on me. So I wouldn't mind spending another Sunday doing that. 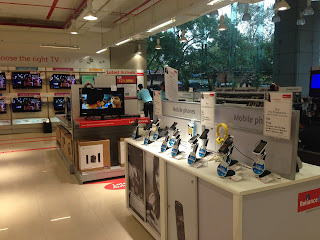 Me and my friend Karishma  reached the store at roughly 12 pm after wading through the terrible Mumbai monsoons. We looked around rather awkwardly wondering who to approach as we were promised an experience we wouldn't forget.Finally we approached a friendly looking employee who had no idea what Indiblogger was and thought we were there to steal phones. Finally another employee told us to wait as the store manager was not around and once he arrived he would tell us what to do. While we waited, lusting over the various electronics we are missing in our lives. I walked to the phone section and looked at them like a hungry child looks at a stranger, he knows he shouldn't ask but can't help staring! (I really need a new phone, saving up!)

We waited and waited and waited some more. Finally we plopped ourselves on the large couch in front of a huge 52' Tv. My legs were aching and I was pretty sure I was not getting up from this couch until the store manager would get me my goodie bag. Zindagi Na Milegi Dobara was being played on the TV, but sadly it was only one scene played over and over and over again. We decided that there is only so many times you can watch one scene, and we'd probably be able to count the number of freckles on Farhan Akhtar's face or our eyes would bleed out. We decided to ignore the TV, and talk instead. We were meeting after a really long time, and a good chat was due. We talked about all our childhood memories (Yes, we are friends since 20 years :D) and on how things are. It takes time to grow and old friend and there is nothing that can make you more happy than spending time with them. We joked and laughed and embarrassed ourselves enough for an entire year. Happiness in a store? I think so ! 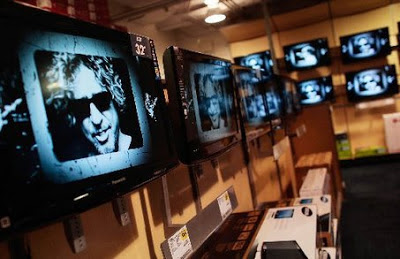 Finally the store manager decided to show up. He took the printouts we were clutching the whole time of the invite we received from Indiblogger and asked us to look around the store (which we already had done 15 times in the past hour) and then asked us to leave. Quite a disappointment, cause we were actually waiting for something to HAPPEN! Sadly nothing did. When we shamelessly asked about the goodie bag we were told we would get it from Indiblogger itself.

Store Review:
Honestly the collection is not so impressive. Its probably because they are still new. The range of products in each category are very few. You can't expect to find every model, you would have to try your luck. The staff is nice and friendly, not to mention they hover like they do everywhere (which is very annoying btw!)
The pricing is a little off, its understandable though they are charging us for the ambiance and massive rent expense. But being from a world where Flipkart is available I'd prefer to save a few bucks. Also the typical Indian was very disappointed, No FREE gaming zone was set up !
The stores are spacious and impressive. Also since they are newly opened they have a few offers going on, on various products so you might want to check that out.
Reliance Digital also has an up and running website reliancedigital.in  which easily impressed me more than the store itself.