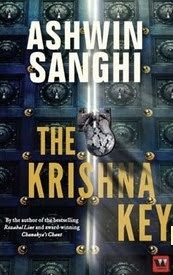 Synopsis from the back of the book :
"Five thousand years ago, there came to earth a magical being called Krishna, who brought about innumerable miracles for the good of mankind. Humanity despaired of its fate if the Blue God were to die but reassured that he would return in a fresh avatar when needed in the eventual Dark Age - the Kaliyug. In modern times, a poor little rich boy grows up believing that he is that final avatar. Only, he is a serial killer."

NEVER JUDGE A BOOK BY ITS REVIEW. Way before I got my hands on this book , there were various reviews floating in the blogosphere saying how amazing or not amazing the book is , and that was my strike one. You should never read reviews before you read  a book cause it just leads to an unwanted biased opinion that you don't want to have. Ashwin Sanghi's claim to fame was with his second book 'Chanakya's Chants' and so when this book was up on Blogadda I was very excited. His first book being the 'Rozabal Line' . So the expectations were high.
The book is 400 pages of excitement , the plot is very strong and crisp. The research is immense and commendable and the characters are dark but what disappoints is the writing , its a little weak if I may say. The words are highly technical and add to the mystic effect, but the narration in general is a little poor.
The complicated religious jargon and verses from the various religious scriptures make it seem like a lesson in religion more than a mythological thriller. The book goes on and on about the search for Krishna's greatest weapon till the last page of the book and the destination and object of the quest changes with every page , confusing and also annoying the reader a little bit .Is it a nuclear bomb , is it an isotope , oh wait its a philosopher's stone.Like what ? That's the best you could come up with it ? Voldemort would be a better weapon. I have always been a fan of Indian mythology even if I only used it as interesting bedtime stories of fascinating fiction,so I quite liked the parts where the story goes back in time and Krishna narrates the story of his life. It brought back the beautiful pictures and books I had read as a child. But besides that the book drags a little. The characters are bearable , just bearable and you don't have an instant liking to any of them. This is probably not my regular genre , you know thrillers so maybe that's why I didn't like the book as much so I repeat 'Don't judge a book by its review'
Ravi Mohan Saini is a professor of history of mythology at Stephen's college is framed for the murder of Anil Varshey , his bestfriend and the owner of 4 ancient seals from the period of Krishna . The seals are a key to a puzzle which Ravi Saini has to solve so as to prove his innocence. Taarak Vakil who believes he is the 10th incarnation of Vishnu is on a killing spree under the vigil guidance of 'Mataji' and the prime suspect for all the murders is Ravi Mohan Saini. Many times when the author links two unbelievable things you will see yourself go "Kya kuch bhi" but it is to be read as a fictional account on most things and that is exactly what it is.
Indian mythology and its ambiguity is beautifully captured along with references and cross references of different cultures/religions/regions , implying how we are all the same . Its a subtle message which will be missed if you aren't looking for it . The plot is indeed  brilliant if only it had been handled a little better.I have read Chanakya's Chant's and loved it ,so my expectations were high. This is a kind of book you will read and forget., worth a read nonetheless. If only for the Krishna story. The ending is a little abrupt/unexpected and not keeping up with the rest of the book. So its slightly disappointing .
All in all , all I can say is , I didn't loathe the book nor did I love it , its somewhere in the list of books I have read and also, I have ordered my copy of Ashwin Sanghi's "Rozabal Line" online cause seriously if the book is better that this one , its worth a read plus the plot is very interesting

This review is a part of the Book Reviews Program by Blog Adda.
Participate now to get free books!