Love & All that Jazz : My Entry for the Get Published Contest 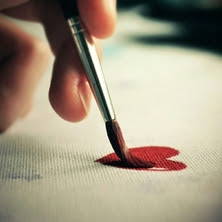 I feel Mills and Boons are a drag and that romantic writers are scum . Because if you look around , the stories that actually touch your heart are of the people you know personally . Your parents , grandparents and now that we have entered the marriageable bracket even friends. I'm not that cheesy , okay maybe a little but that's it . So when Indiblogger came up with the contest for anthology of love stories I thought there would be no better time to write about my  our story. Also its like a lifeboat that is saving me from dying a painful death in "Writer's block Hell"

The Idea
Name : Love & All That Jazz
This is my story :) Like in first person. (Names are obviously different cause I'm a superhero and I cannot reveal my identity)

Rahul and Isha were blog friends. Rahul was from Bangalore and Isha from Mumbai. They met at a party once through a friend and exchanged numbers. Rahul went back to Bangalore and they became chat buddies till one drunk night when Isha called Rahul and started talking to him, from casual flirting to how it would be to marry each other. Their relationship sprang out of nowhere going at the speed of lightning.

And then they started talking since that day on, day and night till the next morning when the milkman rang the bell and woke the household. He would put her to sleep. She would send him handwritten love letters. Is this a normal relationship, were the cliques not met? Their story totally had the cliques though, orthodox parents , 892 kilometers between them, a big age difference and bulky phone bills. The distance never bothered them nor did the fact that they had seen each other just once.
But can a relationship survive on Skype Facetime or phone calls . And that isn't all, 3 months into the relationship and Isha is told that Rahul is selected to join the Indian Air Force a dream he has been cherishing since he was a young boy of 10. The training period is one and half years. Is it really going to be so easy?

But what when Rahul comes to Mumbai to meet Isha, will it be any different ? Do they make it. :)


Another Idea maybe ?
Name : High Flying Love
This is a story of a friend. And it was absolutely like a fairy tale. Makes you want to believe in faith and heavenly forces that seem to be uniting lovers all around the world. Cause someone somewhere is made for you...says Dil Toh Paagal Hai. Okay now with the plot ;

Anaita was late as ever , she had a very important meeting in  Hyderabad and she was going to miss her flight , her boss would kill her. She looked at the watch one last time and made a dash for the boarding terminal when she tripped over an abandoned suitcase. She could barely move, she made a painful cry and looked for some help. Just when her eyes fell on HIM.

Ishaan Awasti the apple of his parents eye, the hot shot billionaire and investment banker. Ishaan was always on time , to the degree of a lot of people's annoyance actually. Today he was going to Hyderabad to visit his cousin sister who recently had a baby. He was early as usual but the airline seemed to have not booked his ticket at all. His anger was making his face red and eyebrows curve into an inverted 'U' , that is when he saw HER

Ishaan lifted Anaita , and apologized for leaving the suitcase that way. Anaita was about to scream when the air attendant asked both of them to board, they finally confirmed Ishaan's reservation.
As Anaita took a deep breath and praised her Ninja skills , Ishaan took the seat next to her.
" Seriously I have to see your face for the next two hours " said Anaita disgusted
" You could look at that bald man there if you'd like , suit yourself " Ishaan said with a smile.

2 years from this day their wedding card said , " Marriages are made in heaven , so it was no surprise that we met in the air"

How did that happen ? How did they fall in love ?

To know watch this space :)

Both these stories are very much real .  I had been meaning to write an entire short story since a very long time, until one day I finally found the motivation to do so. Indiblogger's initiative with Harper Collins " Real Love in New India " .
They basically want you to write a gist of your story and post it on your blog. Then they will revert to you while you can build on your story. The best stories get published in an anthology of stories by Harper Collins.

This is my entry for the HarperCollins–IndiBlogger Get Published contest, which is run with inputs from Yashodhara Lal and HarperCollins India.

Pliss to vote for me here

Ps: I will be posting these stories soon, whether I hear from them or not :) So wait up.