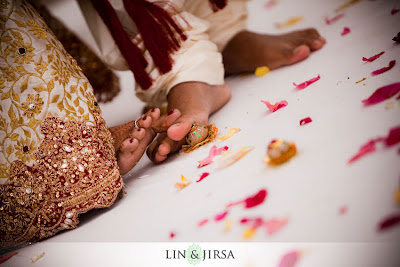 Recently i attended a inter-caste wedding ..gujju girl weds south indian boy and not once but twice ..
Yes they got married according to the rituals of both the castes and it was actually interesting and fun to watch ..
During the South Indian wedding the bride was laden with flowers and not just some flowers lots of flowers ! She actually looked like a flower pot :P..south indians don't believe in jewellery the only ornaments they use are flowers ...their ritual was short and sweet and started and ended just at the right time .. Then came the gujju ceremony it was late , long but still pretty interesting.. the credit here goes to the priest he decided to use a mike and let everyone present know what each ritual meant so it was pretty educative too :) For starters i didn't know there were only 4 pheras in a gujju ceremony and 7 steps for each vow ! One could easily see the cultural divide among the crowd the relatives of both sides sat in different rows ..each one trying to be snobbish in their own way..the parents seemed happy and accepting though ..
The sangeet that was before the wedding was also hilarious in its own way.. a group of singers was called and they sang the gujju wedding songs for the bride for 2 hours without a break while the south indians just stared with a dumb and rather bored look on their faces. The next hour was great because the groom's close knit famnily included two personalities who are playback singers and they were spontaneously asked to sing for the guests which they did and did well ..they sang hindi songs for the benefit of all thank god for that ..Varsha maasi as they fondly called her she had a electrifying voice and she sang many songs and entertained everyone till the food was served . She also made the couple dance along the tunes of a slow song while the oldies gaped in horror as how they were dancing in front of the whole community but they seemed to be unaware of anything or anyone around them..aaah the film like romance :D ..and no points for guessing the food included dosa and idli *rolling eyes*
Back to the wedding after the 4 pheras and the exchange of garlands there was just one little ceremony that was left..We have a little ceremony where the cousins/friends of the bride steal the shoes of the groom and return them only when they are handsomely rewarded..yes just like a scene out of Hum Aapke Hain Kaun :P
Me being one of the cousins we had our hands on the groom's shoes and we were waiting for our reward which we did get 500 each for the ten of us :D generous jijaji  :P 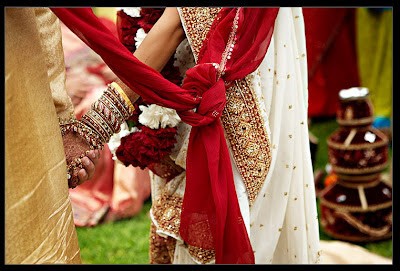 The wedding was finally over and more than the guests i'm sure the groom and bride needed some rest after 3 hectic days ...You know what i love about weddings ..it's how happy the couple look ..its their day ..a day that will never come again but a day they will always remember ..a day when you decide to share everything including yourself with someone else someone you love and the smile you have on your face just imagining the life you will have from now just doesn't seem to go away...:)
Personally I'm terrified of getting married ..no it doesn't mean i never will..i will but in time ALOT of time ..I'm scared of the commitment of being so close to someone of not being able to make choices without keeping someone else in mind ..the fear that my dreams will end and his dreams will become more important ..or maybe he'll want to make "our" dreams come true ...together but what our the chances of finding someone so perfect pretty less right so its scary ! ( its not pessimistic its called practicality )
Newhoo this wedding was an experience for me ..a nice experience :)
Congratulations Minjal and Srikrishnan :D May you have a happily married life :)