She was in a rush . Today was going to be a busy day. Sundays are supposed to be for rest, aren't they ?
She made her way to the book exhibition . Some friends were going to join her later. Books gave her a high , reading was more than just a hobby.
This book exhibition was not like others though , it was for charity . She was going to buy donated books , the proceeds of which would be used for educating street kids. She was always up for a cause , any cause . A complete fighter. She reached her favorite eatery , where the sale was held.
As she was making her way up the stairs of the beautiful five storeyed building of the restaurant. She found a friendly face on her way and asked about where the book sale was being held. He just stared at her . She waited for his answer with an amused expression. She asked again , this time slowly.
" I'm sorry , its just that you have beautiful eyes. Its over there , at the end of the corridor . " he finally said with a sheepish smile .
She was a little taken aback and also a little creeped by this complete stranger complimenting her eyes.
" Thanks" she mouthed and walked away but as she did so she smiled , the most genuine smile in days . A smile that reached her eyes , because a stranger had complimented her and she knew he meant it .

Today Priya was meeting an old friend. There was an age gap between them , almost a 12 year gap. Friendship they say doesn't see age. Her friend was married and had two beautiful daughters. Priya tried to remember the last time they met , it was around 2 years ago , it was Ananya's younger daughter's naming ceremony . Ananya and Rahul were the perfect couple . Madly in love . They had eloped and married each other at the age of 22 , against their parents' wishes. Young love , Priya thought . Ananya and Rahul were the reason for a lot of people's envy.
As Priya entered the coffee shop , she spotted Ananya smiling at her. Something was missing from the smile though , her face it looked a little wrinkled. It was probably age. They chatted about what had been up in Priya's life . Priya had always been the talker. She had so much to tell Ananya. Once she was done , she shot questions at Ananya , asking about Sia and Aria.
" They are fine , Sia is all kicked about school. Aria has started talking , and she just doesn't stop." said Ananya with that motherly smile.
" How's Rahul , its been so long since I met him. " enquired Priya.
" I thought you may have heard " said Ananya .
" Heard what? " Priya was now tensed.
" Rahul left me . He cheated on me. He's been having an affair with his widowed senior at work . He lives with her now ."
" What ? I'm sorry I really didn't know . What about the kids ? " Priya was now choking on her words , they had been married ten years , ten long years . How could he just leave.
" Well he doesn't want to have anything to do with the kids , I can't even file for a divorce. The house is in his name , I don't have a job and the kids are too young right now for me to work full time. There is a big loan on the house. I asked him to stay , for the kids if not for me. I told him he could have an affair but just support us , but he didn't , he just... " Ananya couldn't say anything else , tears were falling from her eyes now . She looked away.
Priya held her hand and said " Please let me know if I can help you in anyway possible ."

" Get him back , can you ? " she said . She didn't want his money , his family , his house all she wanted was him . She still loved him and probably always would.


Isha was coming to Mumbai after three years. Isha's dad was in the civil services , they moved alot. Three years back they had moved to Delhi . This move had been a little difficult for her than the rest.
She was coming back today , her dad was transferred to Mumbai again. Of all the places , she had been to she loved Mumbai the best . She was born here. As she entered her house , the same house which she had left some years back , memories flooded in of all the times she had spent here. Just as she was lost in her thoughts, the door bell rang . It was Saloni , her bestfriend. They had kept in touch for all these years , they were in the same school back then and couldn't do without each other .
" Ishaaaa !! I' m so happy to see you , you are finally back. Let's go down everyone is waiting for you. We missed you so much " Saloni finished excitedly.
Isha met all her friends and they talked about all times they had when she was here and all that happened while she wasn't . But as they spoke she looked around for that familiar face. She had assumed he wouldn't be here anyway. It was finally dinner time and Isha's mom called out to her to come up again. She was about to leave , when  someone called her .
" Hey ! Got a minute ? "
Isha's heart skipped a beat , she was staring into the same blue eyes she knew so well. The boy with the crooked smile, and messy hair looked at her intently , she knew the look.
"Hey Rohan ! Long time eh ? " she tried to be casual.
" I'm sorry Isha , I really am . I know it might be too late for that but I really didn't mean to hurt you. I haven't been with anyone since you left , and I missed you. " Rohan said so fast , like he had rehearsed it over and over . He had.
Isha just looked at him , not knowing what to say. " I missed you too , but don't say you didn't mean to. You cheated on me, ofcourse you meant to. "
"I'm sorry . " said Rohan while he stared at his feet.
" Lets be friends like before everything ." Isha said with a smile
" Yeah, thanks. " Rohan said , still avoiding eye contact.

Forgiveness is not something we do for other people . We do it for ourselves to get well soon and move on. 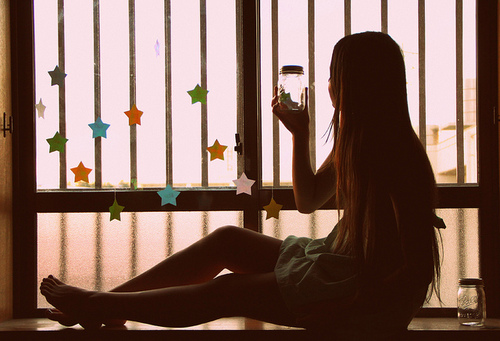 I know this picture has nothing to do with the post , but its beautiful :)
(Courtesy : Nagi Marie Quirk's photostream)

Ps : This is not fiction , only the names are changed :)