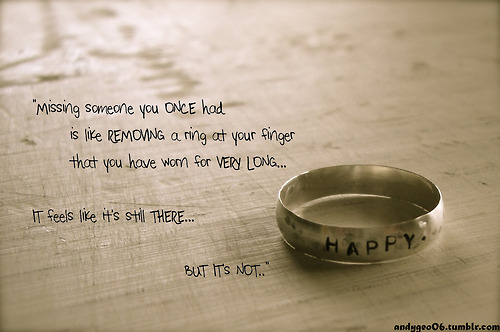 Sometimes in those contemplative moments I wonder how is it humanly possible to still hurt about something that happened so long ago. But amazingly that void still exists. I know a list of people who would be really mad at me for writing this at all. But I shall write and forget.


Its like a part of you is still there so strongly with me. Our jokes which I may not remember, the awkwardness I tried so hard to forget, the hatred I felt if only for a short while. All of those emotions a little bit still there.
There is square shaped hole I try to fill with a circular peg of my relationships with other people. But it doesn't feel right. I miss that friend more often than not, with discussions on everything under the sun even if it only meant making you feel good about a breakup. I still stand by how it was for the best. But it was the best, carefree..endlessly dramatic but in retrospective carefree time. Maybe because I could tell you anything or maybe because I had never let anyone so much into my life. It probably overburdened you, this kind of responsibility.
My only mistake  probably was mistaking it to be love when it was only much more. I remember telling him that you were my soulmate. It hurt him, but only until I explained how Soulmates are way more than what the world makes it to be. Love is cheap, friendship and pure connection is rare and beautiful. No one can match to how much of a friend and a gem of a person you could be. You know that karmic bond, this person had to be in your life, like a plot by destiny and I know that because there is once again a silent tear in my eye while I write this. For the pineapple pizza, for the insane amount of coffee, for that drunken night, for birthdays, for epic phone calls and the understanding without saying a word I am glad I knew you.
He is amazing, and I see finding him as the only wonderful outcome of losing you. But then on second thoughts I had to find him eventually, someday. To a happier much better life with or without you.

'Love is easy to get over, its the friendships that kill'

Email ThisBlogThis!Share to TwitterShare to FacebookShare to Pinterest
This is about.. Awesome April, Personal Ramblings, Stories