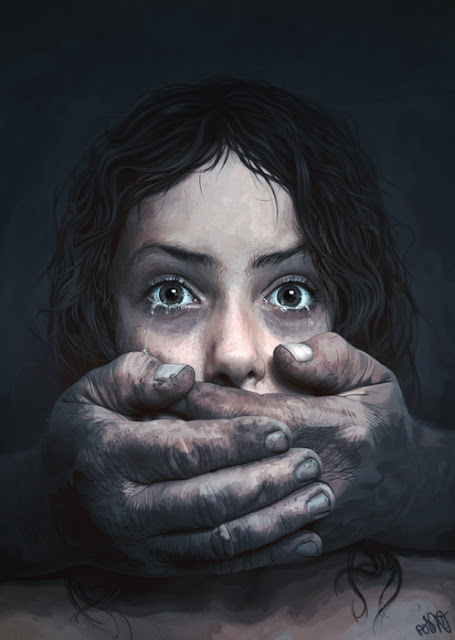 I was kidnapped from a mall in Delhi. My parents and I were there for a vacation. I was only 10 . The man who kidnapped me was huge and had a rectangular face. I remember every minute of that day not because I have a great memory but because I just can't forget it. I was sold for prostitution that night.I was sold , they had a price for me . They analysed my body . Ten thousand for the fair skin and ten thousand more for the perfect waist. I was fully clothed yet I felt naked. I was forced to have sexual intercourse with a complete stranger. I was raped , repeatedly. I tried to get out of there , tried to run . I even managed to escape a few times but was never successful. I was beaten up brutally by the man who had paid my price. I wanted to be home so bad.
Today I have slept with three different men. I don't feel anything any more . I'm hollow from within , absolutely feeling less and hollow . I have a daughter . She was an accident , a lucky one indeed I am alive only for her. Many a times I felt the urge to end all this , to just end my life but then I couldn't. I couldn't build up the courage to do that either . Many times I tried to get help from the police , but they treated me like a sex worker too and not like a woman. They abused me and I was shunned. I'm immune to all this now .I didn't choose this life for myself. I deserved a happy home and the warmth of family.I deserved the right to freedom and I deserve to have a choice when someone tries to make sexual advances at me. I'm going to protect my daughter from this trap .She goes to school unlike me. She is doing well at school . She doesn't know what I do for a living . She never will . Sometimes I feel I should try and do something else. But what else can I do , I didn't get enough education to make a decent living . She sees men coming into the house and leaving sometimes , I tell her they are friends of her father's . She thinks her father was a good man. I would want her to think so . I don't know who her father is. I don't need to know. I'm going to give her all the love  she deserves and she is not going to be just another statistic like me.

- A story that was never told , just like many such stories -